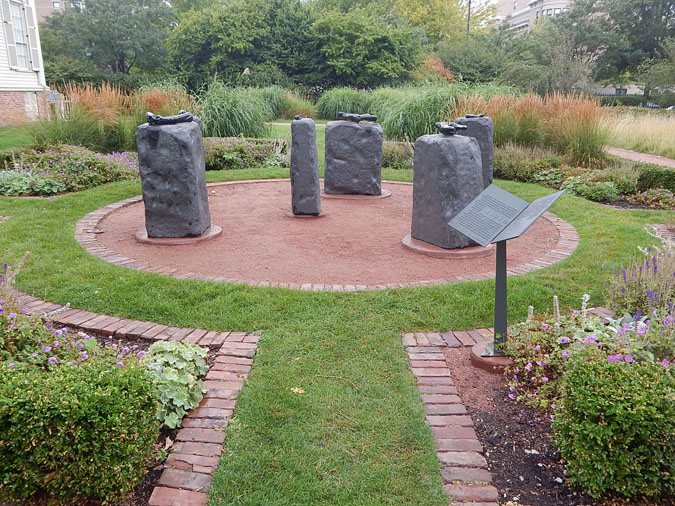 Helping Hands commemorates Nobel Peace Prize winner and social reformer Jane Addams (1860–1935), who established Hull House (the nation’s first settlement house), advocated for women’s rights and founded the Women’s International League for Peace and Freedom. The sculpture was created by artist Louise Bourgeois, then in her eighties. Rather than depicting Jane Addams with a figurative sculpture, in 1993 Bourgeois created a series of carved black granite hands, representing Addams’ humanity and generosity towards the many people to whom she reached out. The sculpture was original installed in 1996 in Jane Addams Memorial Park at Navy Pier. Following vandalism in 2006, it was removed and the damaged pieces were recarved by the artist, then in her mid-90s. In 2011 the memorial was moved to the Chicago Women’s Park and Gardens. The plaque at the site is entitled “Jane Addams Sculpture Garden – visionary” and summarizes her life and contributions as follows:

SOCIAL PHILOSOPHER – Jane Addams envisioned a peaceful world community based on cooperation, mutual understanding, and acceptance of differences.
PRAGMATIST – She advocated the participation of all citizens in the creation of a just and democratic social order.
WRITER – She authored eleven books and hundreds of articles.
LECTURER – A compelling public speaker, she drew upon her experiences at Hull-House as a touchstone for larger social concerns.
DEFENDER – Committed to civil liberty, she deplored violence, stressed compassion and multicultural understanding, and promoted a vision that valued life over death and liberty over coercion.
MEMORIAL – This first monument in Chicago to a woman is dedicated to Jane Addams and the many she served.
SYMBOLS – It depicts different ages of humankind – gentle baby, vulnerable child, able adult, aging parent.
HANDS – Comforting, helping, strong in solidarity, the hands recall Addam’s words: “Perhaps nothing is so fraught with significance as the human hand….”