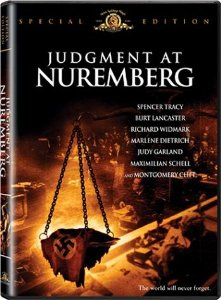 Historical Background:
The Nuremberg Tribunals prosecuted three types of offenses: crimes against peace (waging aggressive war); war crimes (violations of the laws of war) and crimes against humanity (including genocide and operating slave labor camps). The former Nazis claimed that they were acting under orders and, since they had violated no written laws, they could not be punished. The Nuremberg judges rejected this on the basis that the actions of the defendants were so atrocious that it was obvious that they were criminal. Those prosecuted in the Nuremberg trials included doctors who had experimented on inmates and prisoners of war, judges who condemned innocent people to death or imprisonment, industrialists who profited from slave labor, and concentration camp administrators.

About the Rating:
Not rated. There is some horrifying historical footage from the concentration camps on the second tape.

Why this Film was Selected:
Most of this film is talk, rather than action and some may find it boring but it is a brilliant discussion of personal responsibility. Made in 1961 when WWII was still a fresh memory, some of the subtle historical allusions may need explaining to a younger audience.

1. Concentration Camp footage.
(2nd tape, minute 11:07 to 21:06 — 10 min.)
(Start with “Your honor, I offer…)
Prosecutor Col. Lawson puts the judges’ actions into perspective then shows footage of the concentration camps.

1. Imagine that an international body such as the United Nations passed a resolution declaring the death penalty a crime against humanity. If some states continued to have laws permitting the death penalty, would it be right to hold trials to prosecute officials for upholding the laws of their country? How about judges or sheriffs who enforced segregation laws in the 1940s? Or slavery in the 1840s?

2. Judges who refused to swear a loyalty oath and wear the swatzika on their robes lost their jobs. Is it possible to work within an evil or corrupt system? Is there a point where that is no longer the honorable thing to do?

3. The defense attorney ultimately argued that everyone was guilty, from the Germans who voted Hitler into power, to American industrialists who profited from the Third Reich. What purpose was served by bringing to trial a few hundred of the top officials?

4. What kind of responsibility does each of us have for our own actions? Is “following orders” a legitimate excuse to do wrong? How do we decide what is right and wrong?

5. Judge Haywood said , “If these murderers were monsters, this event would have no more moral significance than an earthquake.” What did he mean? Do you agree?

6. Herr Janning argued that the crisis in Germany made supposedly temporary measures that subverted justice seem necessary. Do you agree that civil liberties can be suspended for the good of the nation? How does this argument apply to the anti-communist McCarthy hearings in the 1950s?