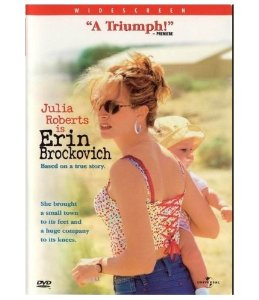 The Film:
Based on the true story of Erin Brockovich, a desperate out-of-work mother of three who convinces a lawyer to hire her and then stumbles upon a monumental law case against a huge corporation. Fueled by a desire to provide for her family and an ever-growing compassion for the unsuspecting victims of a grave social injustice, the unlikely Brockovich triumphs over the modern paradigms of social norms, etiquette, and professional qualifications.

Historical Background:
In 1952, Pacific Gas & Electric opened its Hinkley Compressor Station as part of the pipeline system that brings southwest natural gas to PG&E’s service area in route from California to Texas. At the same time, they began dumping million of gallons of wastewater from their cooling system into unlined ponds on the facility property. The cooling water contained hexavalent chromium (chromium 6), which subsequently contaminated both the ambient air and the local groundwater supply to a chromium 6 level 400 times the EPA’s safety standard. By 1987, the residents of the high desert town of Hinkley, California, who had been breathing, ingesting, and absorbing the toxin for decades, developed a wide range of physical illnesses, including cancer, respiratory problems, and skin diseases. The investigation begun by Erin Brockovich led to the biggest settlement on record for a civil class action lawsuit.

About the Rating:
R rating is exclusively for language.

Why this Film was Selected:
This film addresses two issues in American life: Big business and the American Dream. First — Big business, which has enjoyed a long, fruitful, and powerful life in America, often expresses a lack of compassion for both employees and customers. Second — the American dream — to be educated, employed, married with children, and in your own home — is just that, a dream. If all people can really count on is to be deceived by the individuals and companies claiming to help them, what hope is there? This film is a triumph of the human spirit — the story of one woman with no hope and no way who challenges the system. Her courage, determination, and compassion show us what is possible when human beings care for each other.

2. Begging for a job
(Minute 10:00 – 16:00: 6 minutes)
After several failed attempts to find work and several attempts to contact her former lawyer, Ed Masry, Erin takes matters into her own hands. She demands employment and asks for an advance on her salary.

4. PG&E’s Second Offer
(Minute 86:00-91:00: 5 minutes. Begin with clip of Jensen throwing rocks toward the PG&E plant.)
The Jensens learn Donna’s cancer is malignant. PG&E lawyers offer Hinkley residents $20 million to settle out of court. Erin is enraged and tells them off.

Suggested Discussion Questions:
1. What effect do dress and demeanor have on a person’s ability to perform well on the job? What qualifies someone to do a job? Does society have any particular responsibility to single women raising a family?

2. In the film, PG&E headquarters in San Francisco makes decisions affecting company operations in Hinkley, California, more than 300 miles away. Speculate upon the size and nature of huge companies. How many levels of management do you suppose there are? Who deals with the money? Who deals with the customers? Who deals with local, state, and federal regulations? How might the organization of such a company breed a lack of concern for people — both employees of the company and customers?

3. Notice how preconceived notions based upon appearance and behavior affect the characters’ attitudes and actions toward one another. Is this interpretation valid? How have you seen prejudices and preconceived ideas about people influence behavior?

This Popcorn Peacemaking discussion guides was produced by the San Antonio peaceCENTER, www.sanantoniopeace.center