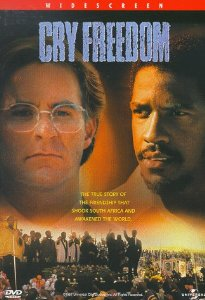 The Film:
A white newspaper editor (Kevin Kline) befriends South African Black political activist Steve Biko (Denzel Washington.) When Biko is beaten to death by the police, the editor writes a book exposing the government and has to escape the country with his family to get it published. Directed by David Attenborough.

Historical Background:
In 1948 the white government of South Africa instituted Apartheid, laws to separate the races and maintain white supremacy. Black South Africans lost their citizenship, were assigned to remote homelands and had to carry demeaning passes. Steve Bantu Biko (1946-1976) founded the Black Consciousness Movement, based on his philosophy that political freedom could only be achieved if blacks stopped feeling inferior to whites. BCM came into its own in the mid 1970s, when many African National Congress (ANC) leaders, including Nelson Mandela, were in jail or exile. The government banned Biko in 1973, restricting his movements and preventing him from being quoted in public. In August, 1977 he was taken into police custody and died several days later. The South African government tried to cover it up. South Africa’s first democratic election, held in 1994, resulted in a Government of National Unity (GNU) led by ANC leader Nelson Mandela. The five policemen involved in Biko’s death have sought amnesty from the Truth and Reconciliation Commission, established to “enable South Africans to come to terms with their past on a morally accepted basis and to advance the cause of reconciliation.”

About the Rating:
Rated PG, there is some vulgar language. At the end of the film white police brutally fire into a peaceable demonstration of school children.

Why this Film was Selected:
Cry Freedom has been criticized for telling the story of Black struggle against apartheid through the eyes of a white liberal editor. However, the scenes of life in South Africa under apartheid excellent. Black South Africans also felt slighted that an American actor was chosen to play the role of Biko.

Suggested Excerpts for Viewing:
1. First half of the film.
(minute 00:00 to 1:22:40 — 1 hour 22 min.)
(End at conclusion of Biko’s funeral)
Show this much, if there is time; feel free to skip over the second half of the film, of the white editor’s escape.
2. Tour of the Black Townships.
(minute 21:50 – 30:15 – 8.5 minutes)
(Begin with Biko getting prepared for the tour)
Biko and some friends take the liberal editor on a tour of the Black townships, showing the effects of apartheid and discussing their approach to ending it.

1. During the tour of the townships, Biko and his friends describe the current society as one where they are only “invited to the table” if they learn how to play by the white master’s rule. They envision a society where everyone participates equally in society on their own cultural terms. Do you see ways that this applies to life in the United States today?

2. Biko has been called the greatest martyr to apartheid. What is a martyr? What other martyrs do you know of, and how can they help move a cause forward?

3. The South African government “banned” Steve Biko, and did not let speak or be quoted in public. In the United States, where the constitution guarantees free speech, we have generally taken the view that public debate lets the truth emerge in a free interchange of ideas. Do you think people be permitted to speak out against their government?

4. The Truth and Reconciliation Commission in current-day South Africa has identified the policemen who murdered Steve Biko. If you were Mrs. Biko, could you forgive them? What does it mean to forgive and to reconcile yourself to past abuses so that people can live together in harmony?

This Popcorn Peacemaking discussion guide was produced by the San Antonio peaceCENTER, www.sanantoniopeace.center